Hello, and welcome back! This is part 2 of 4 of the Building a Photo Gallery app in SwiftUI series.

In this post, we will continue our discussion about memory management from the perspective of the user interface. The UI will be the one to show the photos in a grid, so it’s important to apply memory management practices so the app’s memory consumption won’t grow as we scroll along the photos.

The user interface that we are going to create is similar to the screenshot above – a grid of photos from the user’s photo library. The grid will have a 3-column row for iPhones in portrait orientation. Each photo will be center cropped and contained in a square Image SwiftUI view. We’ll use LazyVGrid wrapped in a ScrollView so we can scroll as more images are loaded into the grid.

The LazyVGrid SwiftUI view has a built-in memory management mechanism that only loads its elements when needed (hence, the lazy keyword). This behaviour is ideal for the photo gallery app since users can have a pretty large photo library. The LazyVGrid will only load photos that are needed to be shown onscreen, so photos are only added in memory on demand. However, the memory management mechanism of lazy loading is insufficient since photos that were loaded into memory, but scrolled past the view area, will remain in memory.

Over time, as new photos get loaded into memory and viewed into the scroll area, memory consumption accumulates until the system runs out of memory, causing app sluggishness, or worse a crash.

The ideal mechanism to manage the memory consumption for the photo grid UI is to:

LazyVGrid covers mechanism#1, but lacks mechanism#2. To avoid memory accumulation over time as the user scrolls, we must add new memory management mechanisms that are familiar to UIKit views, such as the cell-reuse mechanism. 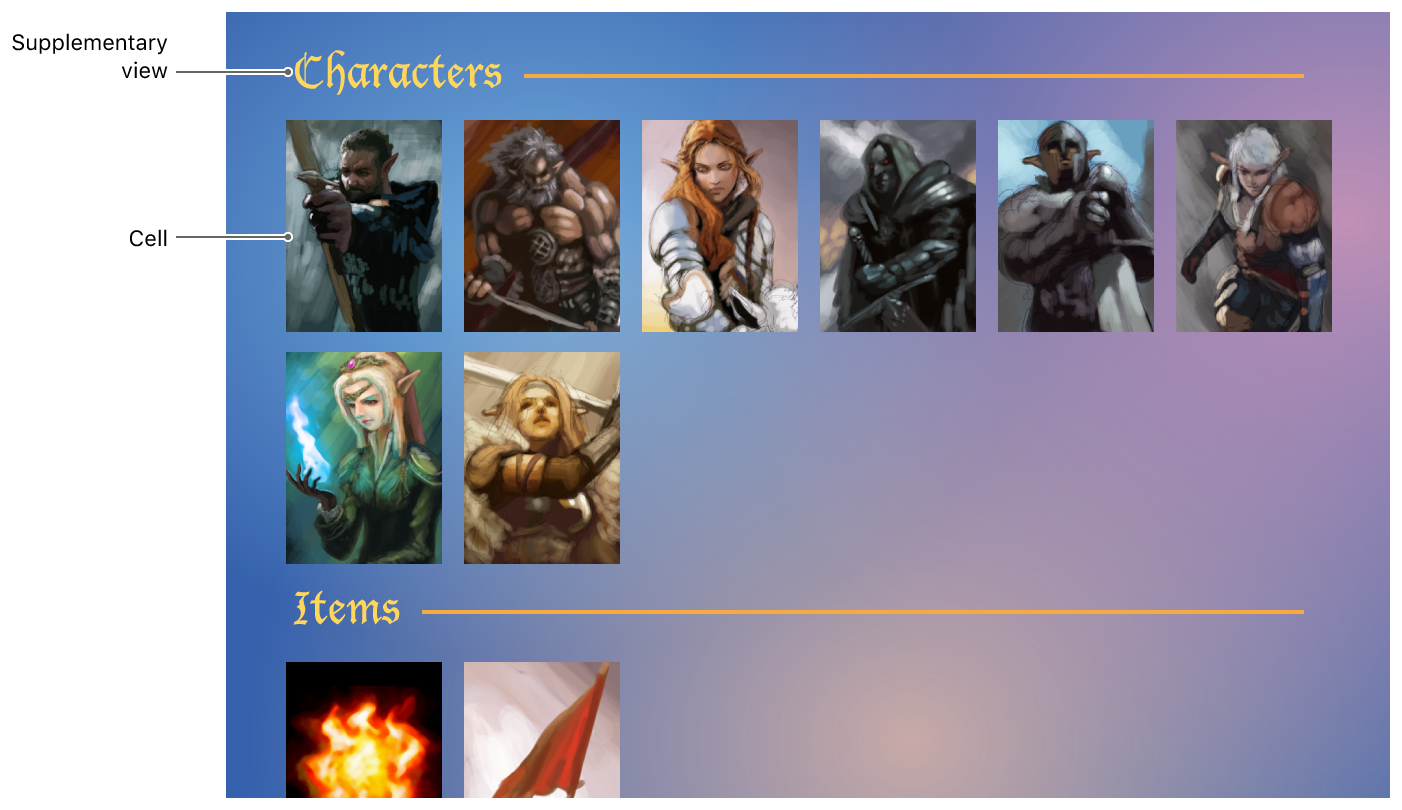 The idea of cell reuse is to load several cells that can be visible on the grid at a time, and release the cells from the memory as soon as the cell becomes hidden away from view. The cell released from memory would be later reused to show other items as the user continues to scroll into the grid or list.

The very idea of cell reuse is quite simple. If 20 items can be shown onscreen at once, only 20 cells are loaded at once, even when you have a million items to show onscreen. When any of the cells go past the scroll area, they should be released from the memory since they are no longer shown on screen. Cells that are released will be reused by another item to be shown on screen. This mechanism does two effective things to manage memory:

The solution to apply the cell-reuse mechanism to LazyVGrid is surprisingly simple. We can use the .onDisappear() modifier on the GridItem so it frees up the image every time the modifier is called.

To do this, we need to create our GridItem and call it the PhotoThumbnailView.

The PhotoThumbnailView should contain an optional photo which we can free up from memory at a later point in time.

Now that we have the photo library service as a dependency, we need to add a property that would hold the photo’s local asset ID that we’ll use for fetching the copy of the photo.

Then we’ll define a function that will do the actual loading of assets from PhotoKit using the easier abstraction of the PhotoLibraryService.

Next would be to create the actual body of the PhotoThumbnailView and use our learnings thus far including the cell reuse memory management mechanism.

This photo GridItem supports the concurrency API from iOS 15 and uses the built-in task support to allow SwiftUI views to interact with the concurrency API. When this view loads, the view lifecycle triggers the task to loadImageAsset() which will ask PhotoKit to fetch a copy of the photo with the local asset ID. When the GridItem goes way past the viewable scroll area, the image is freed up from memory so it won’t unnecessarily accumulate memory usage, mimicking the cell-reuse mechanism of UICollectionView.

In the next part of the series, we’ll continue building the grid UI to use the PhotoThumbnailView as the LazyVGrid‘s GridItem. I hope that you have learned a lot from this post. I’ll see you at the next one!